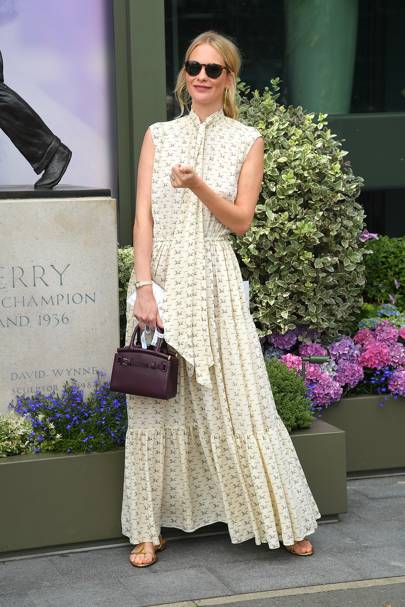 Not by any means the only lady to take our consideration in SW19 this week, notwithstanding, Kate Middleton showed up of the competition so far on Tuesday dressed head-to-toe in splendidly suitable Wimbledon whites. She plays her job of supporter of the All England Lawn Tennis and Croquet Club in all respects genuinely, all things considered.

A custom shirt dress planned by British brand Suzannah, Kate counterbalance the great piece with a thin dark belt, obeyed siphons and raffia box sack by Alexander McQueen. In any case, it’s not just the Center Court pursuing the chicest tennis fans, with the evian Suite on Court 1 playing host to a buffet of enormous names who are on the whole demonstrating that the unassuming summer dress will everlastingly rule.

Week two got off to an extraordinary begin on Monday, with any semblance of Sienna Miller, Maisie Williams and Anna Wintour all ending up taking their Center Court seats. Look down to see the majority of Wimbledon’s chicest landings as we update it all through the competition…